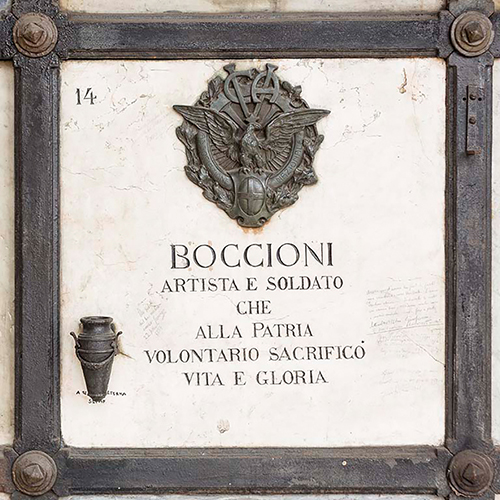 The plaque commemorates Umberto Boccioni, the leading artist of Futurism who died in the Sorte district of the Chievo district of Verona during the First World War.
Enlisted in the Lombard Battalion of the National Corps of Cyclists and Motorists volunteers, including other protagonists of the Futurist movement, such as Ardito Desio and Filippo Tommaso Marinetti, he fought on the Monte Baldo front during the first months of the Great War. Once the battalion was dissolved, all its members were made to join the official ranks of the army and the artist was assigned to the 29th Artillery Regiment of campaign in Chievo. On August 16, 1916, during an exercise, Boccioni was unseated and dragged several meters from his mare, running into view of a truck. His stunned body was found by a peasant woman and transported to the military hospital of Verona, where the artist died the following day due to his serious injuries. On his tombstone the surname and the epigraph are engraved, which recalls his activity as an artist and as a patriot. In the upper part there is the coat of arms of the National Body of volunteer cyclists and motorists, made of bronze. On the marble slab you can read the commemorative writings dedicated to him by friends, relatives and admirers and in the small vase placed on the left side of the tombstone you can often find brushes, left by those who visit the tomb of Boccioni as a tribute to the his pictorial activity.