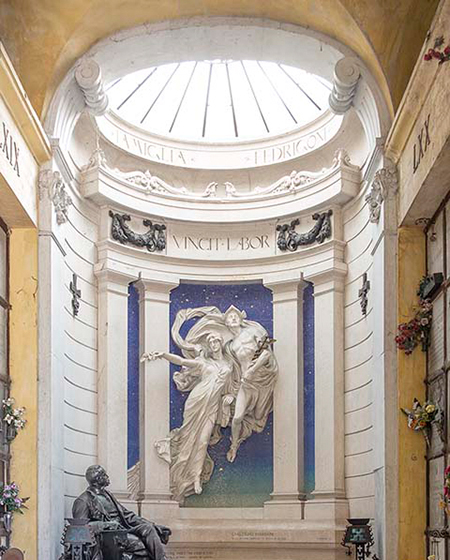 Although it was ready to be completed already in 1914, the work was placed in the Monumental Cemetery of Verona two years later due to Italy’s entry into the war in the First World War. The theme is expressed by the motto “Vincit labor” (the work wins) and is made by two allegories carved in marble: Mercury, personification of commerce, and a female figure representing the Industry. The latter holds a branch of laurel to the bronze statue depicting Giuseppe Antonio Fedrigoni seated in an armchair, the man who in 1888 refounded the Fedrigoni paper mills in Verona started in Trento in 1753 and still in business today. The two marble statues, almost in the round, break away from a starry sky made with the mosaic technique. The work is completed by wrought iron parts in Liberty style.