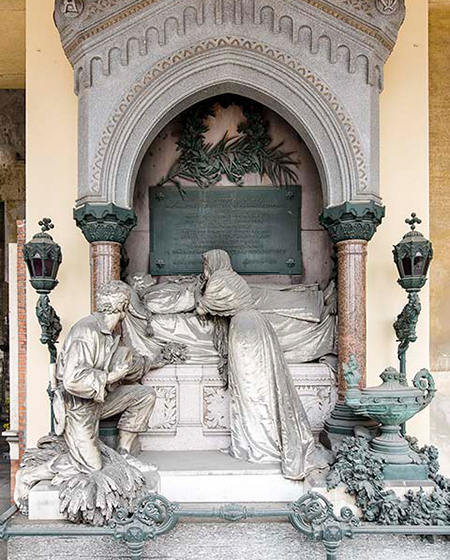 The monument is an example of how families of high social class celebrated their dead and is one of the most expensive of the Monumental Cemetery: at that time, to build their own sepulcher, the Allegri Zorzi family spent 70 thousand liras, which today correspond to about 290 thousand euros. There are three protagonists of the scene: Scipione Zorzi who lies composed in the funeral bed with his hands gathered to his chest, the widow Giulietta Cressotti who draws near her dead husband and, on the left, a stocky-looking and squat farmer with a scythe belt that kneels on a sheaf of ears to offer Scipione a bouquet of wild flowers, a sign of affection and gratitude towards the owner. The picture reflects the positivistic confidence of social ascent and justice, represented with a taste between neo-Gothic and neo-Renaissance and made with polychrome marbles, bronze inlays and gilding.